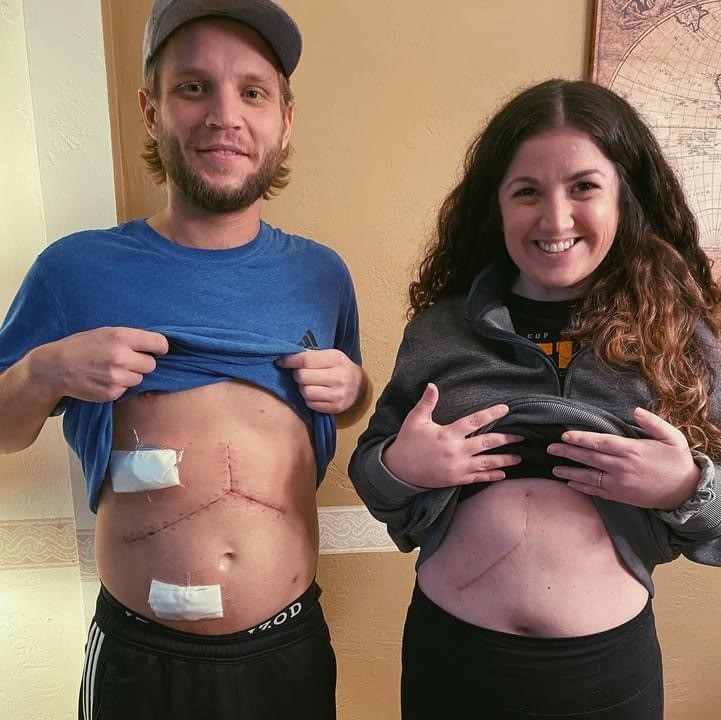 “In 2015, I started having symptoms of extreme itching and fatigue. After seeing a couple of doctors and doing some blood work, I was sent to UPMC. There, I was quickly diagnosed with a rare disease, PSC (primary sclerosing cholangitis) liver disease. I had multiple ERCPs with stints installed in the liver to open the bile ducts back up and a liver bile duct drain was installed to help drain the excess bile. Once the excess bile was removed, they removed the drain and stints. The itching and fatigue got better but, due to there being no cure for PSC, I was placed on the liver transplant waiting list.

For the next 3-4 years, I lived a fairly normal life and was mostly non symptomatic. I was on medication to help with itching and I found that sweating and staying physically active helped with the symptoms. The last year, the symptoms started to increase and worsen. I had several episodes of cholangitis/infections and several hospital visits. They attempted another ERCP but were unable to do anything more medically. They advised the next best option is to find a living donor, as my MELD score was too low to get a donor from the waiting list.

My family reached out on Facebook and a lot of friends, family and even complete strangers signed up to be a living donor. UPMC went through the screening process and one of my good friends from high school, Jackie, ended up being a match. There are no words that describe how thankful I am for her signing up and going through with the transplant. I will forever be thankful to her, my family/friends for support, and all of the doctors, nurses and transplant team at UPMC.

The transplant process went as expected and the doctors/surgeons advised everything went good for both parties. We are both currently at home and recovering. I started to feel better immediately and have only gotten better as the time passes and the healing continues. My last check up, my blood work and liver numbers were almost back to normal. This is the best I have felt in 5 years. Once completely healed and I get the clearance from the doctors, I plan on living life like there is no tomorrow, as I have already received a second chance at life!”

“Once we found out Zach was on the transplant list, it was really a no brainer for me to sign up. Zach has been a close friend for over ten years now, so I wanted to do anything I could for him.

The process from applying to the team telling me I was a match took about 2 months. After that, everything moved pretty quickly. We had the surgery November 9, and Zach and I were both home within the week. The team at UPMC was fantastic and made everything super easy for me and my family.

Overall, this was one of the best experiences and the fact that I could help my friend only made it that much better. It was such an honor to be able to do this for him.”