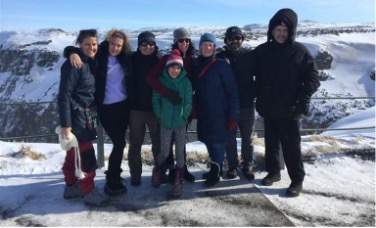 William “Chip” Crawford, father of two and loving husband, now cherishes every second of his life after suffering a devastating injury while vacationing in Iceland. What was supposed to be a fun father-daughter adventure turned into a life-or-death situation for Chip.

While vacationing in Iceland with his daughters Bryce and Shannon, Chip slipped and fell into a hot spring at a resort with his left leg and entire left side being submerged in the burning water. Without the help of his daughter and surrounding strangers at the resort, Chip wouldn’t be alive today. After being flown to a hospital in Iceland, Chip received treatment for two days before being transported to a hospital in Pittsburgh.

In Pittsburgh, Chip was put into an induced coma and underwent 13 skin grafting surgeries using donor tissue. West Penn Hospital, one of the top burn centers in the United States, helped stabilize Chip, along with LifeCare Hospital and HealthSouth Rehab Hospital. After dropping from 200 pounds at the time of the accident to 140 pounds post-rehab, Chip began to recover and started going to the gym daily.

Now healthy, Chip and his family returned to Iceland to complete the vacation they originally set out on and took many photos to capture the memory. Chip expresses great gratitude to everyone involved in his rescue and recovery, including his tissue donors, and knows he wouldn’t be here today without their generosity.