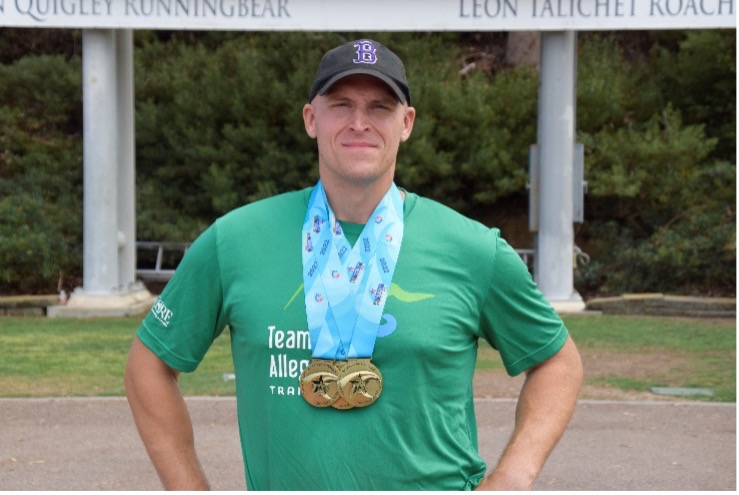 After winning gold and setting records at this year’s Donate Life Transplant Games, Robert Healy III is heading back to school. A beloved professor and Co-founder of the Sports Information and Media program at Duquesne University, Robert tackled the challenge of a lifetime just a few years ago: helping to save his father-in-law’s life.

When he learned that his father-in-law, Gary, was sick and in need of a liver transplant, Robert was the first to volunteer his help. In 2016, Robert and Gary underwent a successful liver transplant. Today, they’re both healthy and doing well.

An advocate for organ donation, Robert wants athletes to know that it is possible to live a full, healthy life after donation. In this year’s games, he won three gold medals in discus, shot put and long jump, setting records for both discus and shot put. He also tacked on three silver medals in pickleball, softball toss and 100m dash!

“I’ve always been enthralled by athletic competition, especially athletes’ abilities to overcome adversity. Sports have been my hobby and passion, and I’ve also made them my career. The opportunity to compete in athletic competitions, especially alongside others who have overcome adversity, was too good to pass up! Just as it was, for me, a no-brainer to save a life with my living donation, it was a no-brainer to compete in the Transplant Games,” Robert mentioned about his experience in San Diego.