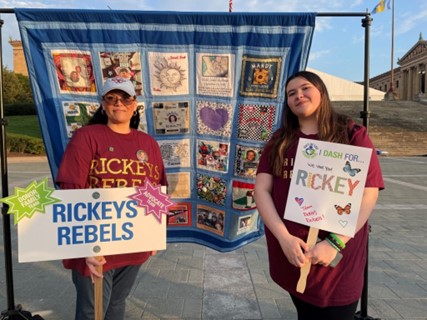 When Rickey Colomy earned his driver’s license as a teen, he made the decision to check the box to be an organ donor. Now, he lives on through the organs and tissue he donated through the Gift of Life Donor Program.

Born with a vascular abnormality, Rickey was in and out of the hospital his entire childhood. Sadly, two-weeks after Rickey’s 18th surgery, he passed away suddenly from a blood clot in his lung. Faced with a tough decision, his mother, Dawn, chose to honor his wishes and donate his organs and tissue. Two patients received his corneas, tissue, and heart valves. After having the chance to connect with both recipients, Dawn is now a strong advocate for organ and tissue donation, especially within the Hispanic community. Dawn says, “I feel comfort knowing that Rickey lives on, just in a different way.”

This past April, “Rickey’s Rebels” ran at the Gift of Life Donor Dash in honor of Rickey.