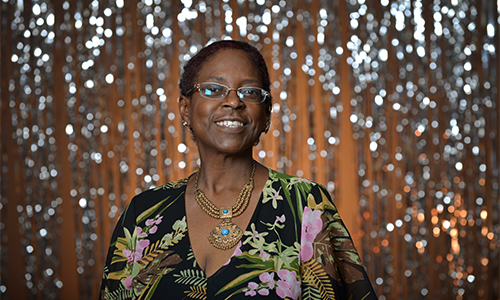 Philadelphia resident, Ramona Howard, was active throughout her life. She served eight years in the U.S. Army as a Chemical Operations Specialist and earned the honorable rank of Sergeant. After nearly a decade of service to her country, she became a surgical scrub nurse, a career that she loved and was devoted to it for more than 20 years.

In her late 30s, she noticed she was having difficulty assisting in surgery. Her hands would cramp up and she would suffer from intense pain that made grasping and releasing surgical tools a significant challenge. At 39 she went to a doctor and was diagnosed with Rheumatoid Arthritis. Her joint pain was severe and affecting her knees, hands, shoulder and hips.

Ramona had a successful career, a loving husband, Jay, and two sons. She never imagined what would come next for her.

“All of my medications had side effects, but they only negatively affected one in a hundred thousand people. Unfortunately, I was the one. My liver had been damaged and it was irreversible.” Ramona said.

She was diagnosed with Primary Sclerosing Cholangitis, and after testing was added to the organ transplant waitlist for a new liver.

“I used to weigh about 155 pounds and got down to nearly 80 pounds while I was waiting. I had muscle
wasting and couldn’t walk.” Ramona said.

Her health began to go downhill and her other organs were being affected by her failing liver. Doctors told her that she would also need a pancreas, small bowel and stomach transplant. For the next two years, Ramona waited and was in and out of the hospital constantly. After a long and painful wait, Ramona received the call that she had been desperately waiting for – she would get a second chance at life. There was a matching donor.

“After my transplant, it took me over five months in the hospital to recover. I left the hospital with newly transplanted organs and had my spleen removed.” Ramona said.

These last three years have made a world of difference in Ramona’s life. She has become a dedicated volunteer with Gift of Life Donor Program. She has even been able to travel with her husband, going to the Caribbean and visiting destinations across the United States. Whether it’s going to see musicals, movies, spending time with her loved ones or indulging her creative talents in baking and cake decorating – Ramona is healthy, happy and forever grateful to her donor and donor family for saying “yes” to donation.

She said, “It takes a really strong person to make such a generous decision about organ donation, especially when they are faced with so much grief. Without my donor, I would have never had a chance to see my sons graduate from high school and college. I didn’t think I had a future, and this year, Jay and I will celebrate our 33rd wedding anniversary.”