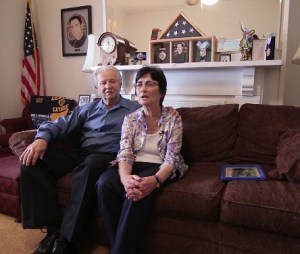 In life and in death, Paul Sciullo wanted to make a difference in his community.

Paul was an upstanding man and a dedicated police officer in the Pittsburgh area for a year and a half when he was killed in the line of duty in 2009 at just 36 years old.

As a registered organ donor in Pennsylvania, Paul was able to give dozens of people a second chance at life by donating tissue.

After seeing the impact Paul’s death made for the families of the tissue recipients, his parents, Max and Sue Sciullo, decided that they should become registered organ donors too. In 2014, five years after their son’s death, Paul’s parents became even further involved in the organ donation community when they gathered at Allegheny General Hospital to support the kickoff of National Donate Life Month, which is in April.

“We lost a son, but we gained a family with the Pittsburgh Police,” said Max and Sue. “We thank them very much. They helped us get through a lot.”

Following his death, Paul was awarded the highest honor given by the Pittsburgh Police Department, the Medal of Valor, and a Purple Heart for his bravery and sacrifice in the line of duty.