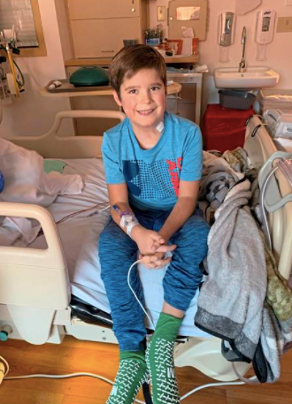 Before Nico Salvio learned how to walk, he had already survived two open-heart surgeries.

Nico was diagnosed at birth with Pulmonary Atresia, a defect that prevents a valve in the heart from forming, affecting the blood flow from the heart to the lungs.

Even with his miraculous strength and ability to endure surgery at such a young age, Nico’s doctors knew that he would eventually need to be placed on the transplant list for a new heart.

As he grew, Nico began to experience shortness of breath, and he was not able to participate in gym class or sports. Eventually, his heart began to decline, and his parents also noticed that his lips and fingers would turn blue due to lack of oxygen.

Nico was placed on the transplant list and, after three years of waiting, in October 2020, his family finally got the call.

“It was amazing,” Nico’s father, Gene, said. “To see the struggle he’s been through and then, all of a sudden, you get that call, it’s like, ‘Wow, this is actually happening.’”

Since recovering from his transplant surgery, Nico is able to participate in more activities and he no longer struggles to breathe. He is looking forward to swimming in his new pool that was built by the Make a Wish Foundation.