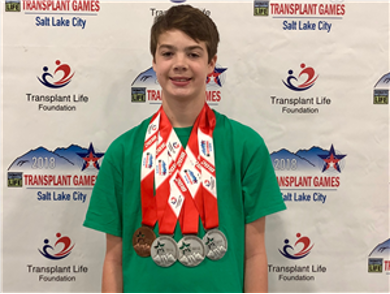 Luke Ball might seem like the average 18-year-old kid, competing as a three-sport athlete and attending high school, but what many don’t know is that Luke struggled to survive his first six years of life. As Colleen Sullivan, Director of Public Affairs and Donor Family Services with the Center for Organ Recovery & Education, says, “Luke is here because of a gift.”

Luke was born with a congenital heart defect, leaving one of his ventricles unformed. He underwent open heart surgery at just 4-weeks-old, followed by another at 11-months-old, concluding with a third at 18-months-old. It wasn’t until he was two that doctors decided he would eventually need a heart transplant.

Throughout the next few years Luke’s family tried everything to help him lead a normal life, but due to fatigue and seizures, Luke couldn’t keep up with his siblings when playing sports and other activities. After suffering a severe seizure, doctors decided it was time for Luke to get on the transplant list. After waiting for a month, Luke finally underwent transplant surgery, recovered, and returned to kindergarten.

Now a strong advocate for organ donation and an inspiring athlete, Luke looks forward to competing in the Transplant Games of America every two years. In 2018, Luke won three silver medals in track and field (shotput, discus, and softball throw), and a bronze medal in cycling. This summer he plans to attend the games with his mom, Stacie, dad, John, and brother, Nate, and hopes to take home yet another medal.