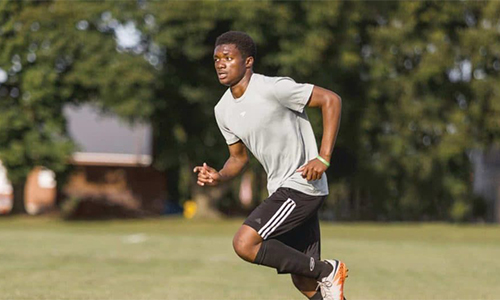 Joe Mansaray isn’t sure how long it took doctors to remove the heart from his chest, or whose heart they replaced it with. His sister, Beverly, can fill in one of the blanks. She said Joe went into surgery around midnight on Feb. 24 and came out in the early morning. Beverly and the family — brothers John and Peter, and father, Peter Sr. — huddled in a small waiting room. Terrorized by the idea that hypertrophic cardiomyopathy, which led to the death of their mother and Peter Sr.’s wife, Mary, could also take their brother.

Joe was a standout soccer player for East Pennsboro as a sophomore in 2014. But one day, Joe woke up struggling to breathe. He said that led to a trip to Hershey, where his condition was discovered, and, when medicine didn’t help, was sent to The Children’s Hospital of Philadelphia. There, he was told he would need a new heart.

While dealing with that, his mother got a call for a transplant. At first, Joe said, they thought things were going well. But his mother struggled following the procedure and passed away on Nov. 3.

“She was tough,” Joe said. “She had a great sense of humor, and she cared for us all.”

Suddenly, Joe had to deal with the emotions of losing a mother while also facing the idea he might be headed down the same road. He wasn’t alone, though.

John said there were times he thought his brother would die, too. “It’s the worst feeling in the world,” he said. “It’s just … bad. But this has pulled us together.”

Joe’s recovery began slowly. He would get winded walking from the bed to the bathroom. But, Beverly said, her brother kept one goal in mind. Doctors told him he could, potentially, work himself back into good enough shape to play his senior season, which he successfully accomplished and even became a starter again.

“I talk about [my transplant] with my dad a lot,” Joe said. “I have to be thankful. Without the family, the donor, the doctors or the nurses, I wouldn’t be here.”

Now going on more than five years since his transplant, Joe has gone on to graduate high school and attend college at Millersville University.