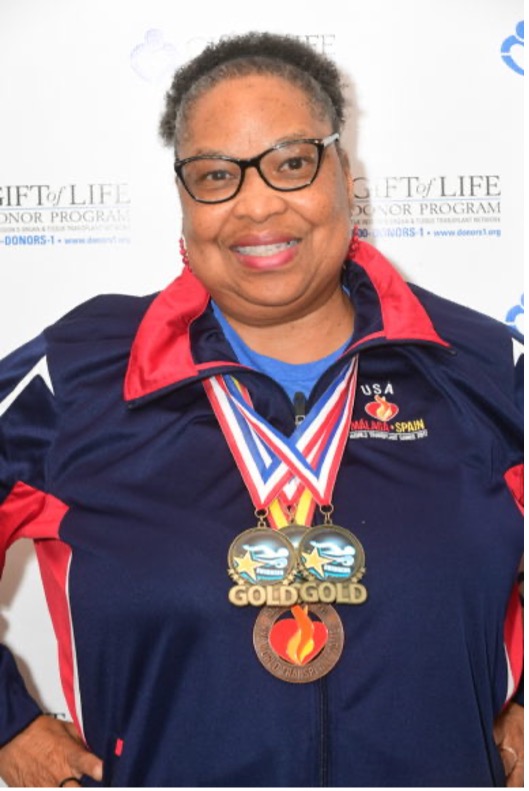 The transplant journey of Janet Dennis shows that even someone leading a healthy and active life can need a life-saving organ. Janet often walked to work and also swam regularly. Despite getting lots of exercise, Janet began experiencing an extremely elevated heart rate. Doctors also discovered fluid in her lungs. After initial treatments were unsuccessful, Janet received a pacemaker which provided a year of stability. Unfortunately, her heart disease progressed, and she needed to be hospitalized until she could receive a life-saving transplant.

A donor hero provided Janet with a healthy new heart, and Janet has embraced life as a transplant recipient. She celebrates the power of organ donation as a motivational speaker and a determined athlete who has traveled the world participating in both the Donate Life Transplant Games of America and the World Transplant Games. She placed in every event in her first competition at the Transplant Games of America, which inspired her to travel to Sweden, South Africa and Argentina for the world games – all while earning 27 medals along the way. Janet thanks her donor family by sending them her medals in the mail, knowing her athletic success could have not been achieved without their loved one’s donation.

Since her retirement, Janet has become a full-time volunteer ambassador with the Gift of Life Donor Program and a speaker at the Hospital of the University of Pennsylvania. She inspires patients on the transplant waitlist to stay strong throughout the challenges of their journey, and she raises awareness of the critical need for more people to register to become a donor.

“It’s important that people understand that being an organ and tissue donor is about helping to save lives. If they saw people who were waiting and knew their struggles, I think they would choose to help,” she says.