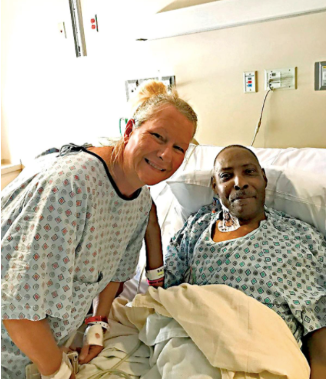 After Diana Natale’s husband was saved by the generosity of an organ donor, she was determined to give back.

In March of 2017, she began testing to become a living organ donor. The New Castle native changed her entire lifestyle – she stopped smoking and lost 40 pounds to qualify.

Later that year, Diana was approved and was able to donate her kidney to Larry Robinson, a man from Penn Hills, Pa. Soon after the surgery, the two were able to meet for the first time, where they had an instant connection.

“You just gave me another chance at life,” Robinson said as the two held hands.

Diana and Larry have remained friends, and Diana exchanges Christmas cards with his wife, Shirley.

“I feel like I got the blessing to do what I did,” she said. “I only wish I had 10 more kidneys to donate.”