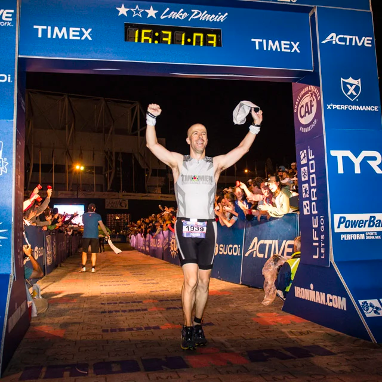 Derek Fitzgerald, of Doylestown, received a heart transplant in 2011 after being diagnosed with non-Hodgkin’s lymphoma, which resulted in heart failure. Derek spent eight years fighting for his life prior to his gift of life. He was first diagnosed with cancer, and later with dilated cardiomyopathy, a type of heart failure that developed from his chemotherapy treatment. Derek had been in the hospital for about a week when his transplant coordinator rushed into his room to give him and his family the news that they received a heart for him, telling him he had a second chance at life.

Just eight months after Derek’s successful surgery, he ran his first 5K at the Travis Manion 9/11 Heroes Run. Derek is now a triathlete who has competed in five Ironman races and more than 80 endurance events since receiving his transplant. Derek also became the first cancer-surviving heart transplant recipient to complete the full 140.6-mile Ironman triathlon. Knowing he would not be able to accomplish what he has over the years without his organ donor, he uses the word “we” rather than “I” when talking about his accomplishments with racing. “My body may be the vehicle, but I know that nothing is possible without your engine. Words will never be able to express my gratitude, but thank you, my friend”.

Derek shares that every day of the last 11 years has been a gift for him, but the best gift is fatherhood. He thanks his organ donor for not only giving him the gift of life, but giving him a miracle – his daughter, who has also crossed several finish lines with him. Derek’s journey is one of many that shows the importance of organ donation and inspires people to make the decision to become an organ donor.