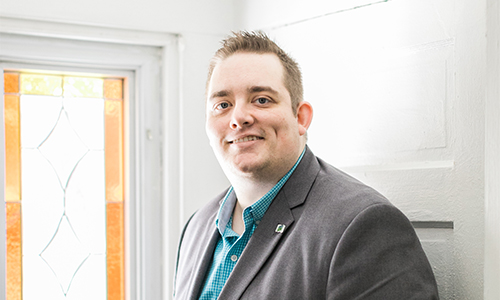 Craig Smith has recently taken on an alter ego.

He, at times, transforms into Pumper, a heart-shaped mascot who attends events and does fun things in social media videos, such as learning how to play roller derby, all with the mission of raising awareness about the importance of organ donation.

As both Pumper and himself, Smith represents Second Chance Fundraising, a nonprofit organization he founded after receiving his own heart transplant two years ago this month.

“It really helped bring awareness on social media because you see a video of a guy in a heart costume whitewater rafting or jumping off a cliff, it makes you watch the video twice and ask, ‘Why is he doing this?’ Hopefully it will lead you to the story and will lead you to think about organ donation,” said Smith, who has been able to fund the videos thanks to a grant from the 1889 Foundation.

Pumper has temporarily been placed on the injured reserve list, though, after Smith broke bones in his leg when he crashed while skateboarding in the costume.

“It’s kind of a cool story already – at least in our opinions – recipient out there in a heart costume trying to raise awareness by doing all of this goofy stuff,” Smith said.

“… And then you add the part about oh, by the way, he also shattered his leg from the knee down. That adds a little bit to it.”

Smith has launched a campaign to bring Second Chance Fundraising to the attention of “The Ellen DeGeneres Show,” which often features segments about organ donation.
He is encouraging supporters to contact the show and mention the organization’s mission and how he broke his leg while wearing the costume, since it is something out of the ordinary.

“I’ve had about 15 write emails, and then we’re going to do a social media push, too,” Smith said.
Smith runs Second Chance Fundraising with his friend Derek Partsch, a fellow 2006 Forest Hills High School graduate.

“I knew how important it was to him to want to give back,” Partsch said. “Organ donation isn’t really something that’s talked about. People don’t like to talk about it unless they have to. We have a pretty wide net of connections and support, especially here locally, that we kind of use all the time for different events and things.”

They raise attention and money by hosting entertaining events, such as 5-kilometer runs, cornhole tournaments and bowling contests, along with other activities involving the Center for Organ Recovery & Education, a Pittsburgh-based organization.

“We want to make organ donation a little more in the forefront of what people talk about and try to do it in a fun way,” Partsch said. “All of our events are designed to be fun and have a good time. You’re kind of masking the sadness behind organ donation.”

Smith needed the transplant after he contracted viral cardiomyopathy at age 26.

Partsch said his friend “handled it in a way that a lot of people probably wouldn’t have. He just kind of went with it,” Partsch said. “There was no ‘woe is me.’ There was no ‘oh, feel bad for me.’”

Needing the transplant led to Smith getting involved in nonprofit activity.

“It puts it in perspective a little bit better for people,” Smith said. “To be quite honest, I wasn’t an organ donor until after I received mine. I signed up then. It wasn’t anything I was against necessarily. It was just something I never really thought about.

“So, obviously, friends and family of ours, they know my personal story. They know not only how important it is now, but they also – just from general conversation surrounding my case – know more about organ donation.”

Partsch and Smith, who both grew up in Sidman, also consider the organization’s work to be a tribute to three of their friends who died when they were growing up together.