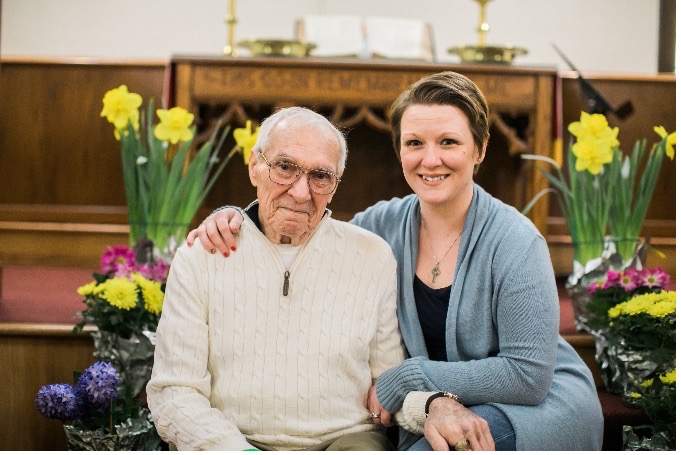 After 29 years working in the United States military and a life of almost perfect health, Bud was diagnosed with cirrhosis. He needed a transplant, but at 75 years old, he knew that the surgery would be hard on him.

“I was in the military for 29 years,” said Bud Mitchell, a former Army recruiter and marine. “I was physically fit for all those years, running four miles every day, even at the age of 60. And all of the sudden I got this little liver problem.”

He was diagnosed with nonalcoholic steatohepatitis, inflammation of the liver which can damage liver cells, leading to cirrhosis. It was also causing Bud’s limbs and stomach to fill with fluid. Every Friday, he underwent paracentesis, a procedure during which a physician drains fluid from the belly using a catheter.

He was draining five liters of fluid every week. Bud knew he needed a liver transplant. But he was 77 years old at the time, and his doctor was worried.

Bud had a detailed conversation with his doctor about the risks of transplant and how challenging recovery would be at Bud’s age. His doctor also suggested that Bud look for a living donor.

Bud’s wife was mingling at church, talking about how hard it was to find a donor, when Rachelle Jeffers overheard and offered to donate.

Rachelle said, “I just knew he needed a donor and I just had this voice in the back of my head saying the word ‘offer.’” She told her husband on the car ride home, “I may or may not have offered my liver to Bud, just wanted to let you know.”

Rachelle was evaluated and decided to give. On June 1, 2017, Bud Mitchell underwent transplant surgery.

Over a year later, Bud is back to riding his bike when the weather is nice. The recovery was tough for him, just as he had been warned. He lost a lot of muscle mass and had to work with a physical therapist several times a week to retrain his body for basic tasks.

But now he’s going on bus trips with his wife and taking walks. He’s getting stronger every day and is trying to work up the nerve to hit the ski slopes next winter. He’s so glad that he was transplanted.

For Rachelle, the recovery was easier. She was young and healthy and went back to work after just a couple of weeks. She gradually built her strength back up and is now training for a marathon.

Bud could not be more grateful. “I thank God for her, she was truly a miracle.”

“Living donation is a powerful thing,” Rachelle said. “It’s an absolutely beautiful experience and sometimes I think I got more out of it than Bud did. Organ donation saves lives.”