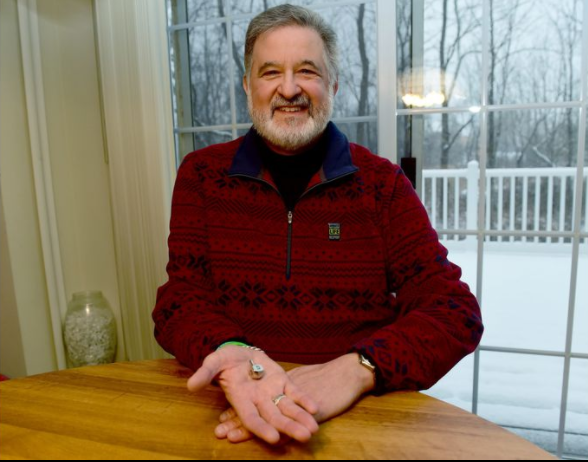 At 35, Brian Zionts-Bernstein realized something was wrong when he was hiking with his son and his Boy Scout troop. He couldn’t keep up and had to keep drinking water and taking breaks to catch his breath. He had a dry and persistent cough, which he thought could be from an upper respiratory infection.

During a visit to his family doctor, Brian was told that his volume output from his lungs was low and that he needed to go to a specialist. Doctors discovered scar tissue in his lungs that was preventing them from expanding properly. After months of waiting to see if it would clear, he had a biopsy and received somber news – he was diagnosed with idiopathic pulmonary fibrosis (IPF), a chronic and often fatal disease characterized by a progressive decline in lung function.

“I was on medication, so the progression of the disease was slowed down,” Brian recalled. “Then in 2013, there was a significant decline in my lung function, and I started to have a lot of shortness of breath.”

Everything became a challenge – the steps at work and walking up hills, and he dealt with extreme exhaustion that required him to take power naps in his car just to get through the workday.

Brian was put on oxygen and it gave him some relief, but his health was suffering. His doctor told him that it was time to be evaluated for a lung transplant. He went through the extensive testing to be added to the organ transplant waitlist, and then the wait began.

“I waited for three months and one week,” Brian said. “I had to go through pulmonary rehab to keep fit and stay eligible for the transplant. It was hard and frustrating. I was on oxygen and tethered to a 50-foot hose constantly. I’d be at work and sitting at my desk and would have to make sure my hose could make it to the conference room if I had a meeting.”

When Brian received the call that there was a donor who was a match, he said that he was scared, excited and had a whirlwind of emotions. After several hours of waiting and ten hours of surgery, Brian had a healthy, new pair of lungs because of the generosity of someone he never met.

Throughout his transplantation journey, Brian’s family was by his side. His wife, Kym, was his advocate during his challenging battle and was there when he came out of surgery.

“I had a tracheotomy and couldn’t talk, but when I opened my eyes I mouthed to my wife, ‘I love you,’” he said.

Brian was discharged six weeks later and had to use a walker until he built up strength.

“I walked progressively more and more every day,” he said. “There was such a big difference after my transplant and breathing without oxygen was amazing. I started walking two miles per day again in my pulmonary rehab, and it was a big achievement. Now, I feel good. I can walk hills and my son, Sam, walks with me sometimes.”

“I wrote to my donor’s family and said, ‘thank you,’ even though that doesn’t seem like enough. I’m doing everything I can to take care of my lungs in honor of them. There are no words to say how my family and I feel. We are so grateful. I volunteer with Gift of Life and try to give back. I’m inspired to spread the word about organ donation, and I hope my story moves people to register.”