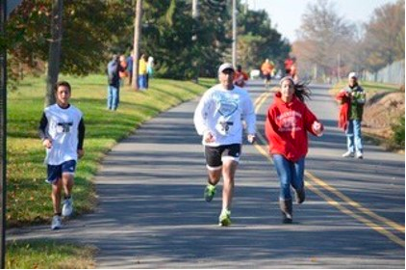 Brian Rath, a husband and father of two, recently celebrated the 10th anniversary of his transplant by running in this year’s Donor Dash held by the Gift of Life Donor Program. Brian was a teenager when he was diagnosed with hepatitis C, a virus that attacks the liver over a long period of time.

Brian had been on the transplant waitlist for 113 days when Penn Transplant Institute called him in November 2011 to announce that a liver was available for his life-saving transplant. Brian’s surgery was successful, and he was able to return home to his wife, 10-year-old son, and 11-year-old daughter just in time for Thanksgiving.

Now 10 years later, Brian, a self-supporting and generous husband and father, believes that his transplant journey has allowed him to better accept help from others around him, even when he knows he might never be able to repay them. Brian keeps a picture of his donor, Caroline, who passed away when she was 15, on his phone. He shares how his ability to run in this year’s Donor Dash and watch his daughter receive her diploma could not have been done without his donor family, and their generosity will live with him forever. “I cannot hear the song ‘Sweet Caroline’ without thinking of her and being incredibly grateful. The generous decision of Caroline and her family literally saved my life” he says.